Me and the booth. This was just before the opening. The banner got hiked up a bit afterwards…

Well I have been back a week and came home to a lot of emails and much work to do. I did want to share some of my experience exhibiting at NAMM for the first time. It was overall an excellent show for us in many ways.

First of all the show behind the show was really quite impressive. It is very well organized from the NAMM front office to (especially) Freemanco who is the agent primarily charged with getting display materials/products in and out of the venue. I can’t imagine all of the logistics involved in pulling something like this off but the Freeman folks seemed quite calm (and very efficient) about it. I guess they must’ve done this a few times. 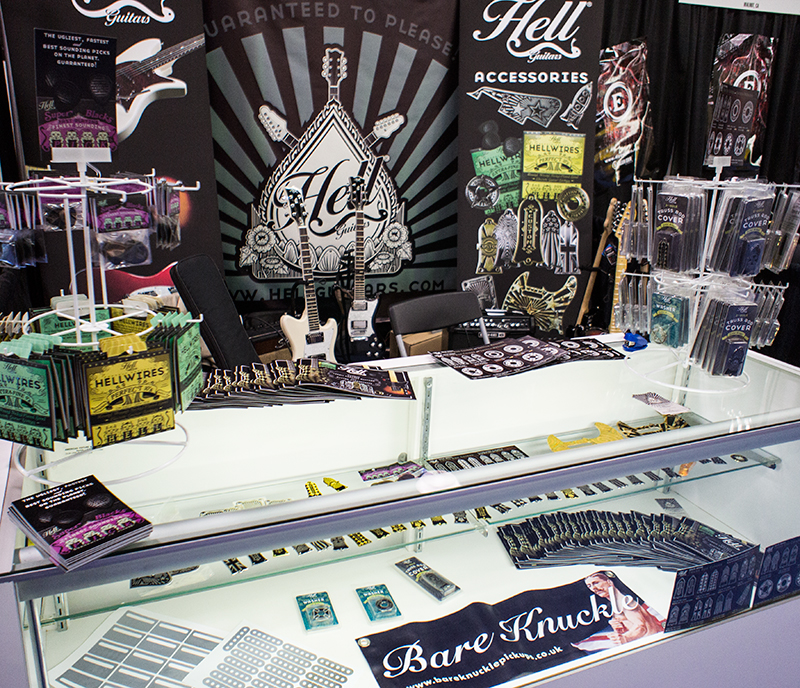 Everything we sell- designed by Hell!

The show itself was a definite success for Hell on many levels. We met with lots of good people including distributors, dealers and lots of players from all over the world. We enjoyed a fair amount of interest in our products and I was pleased to see that there wasn’t really anyone doing what we are. Seems if folks weren’t interested in the guitars they were into the accessories or vice-versa or then again, sometimes both. We also made friends with some of the other people exhibiting and as a result, we may be cooperating with some of them in the near future. By exhibiting I got a very good picture of where we stand in the industry. Very low to be sure but with definite things going for us.

Robert Renman of Master Guitar Academy and The Enigma

I was accompanied  each day of the show by the lovely and talented Robert Renman who demoed our guitars and was a great help all-around. Robert had dozens of people come to the booth just to shake his hand and thank him for all the great lessons he has created. My brother, John, also helped out for the last two days of the event and was his always reliable and supportive self. Was also pleased to have the assistance of my old friend and neighbor, Mark. We grew up together in Redondo Beach, California but we’ve not been in touch for years. He used to play professionally and was a very handy fellow to have around. We may be working together on getting some distribution going in N. America to help cut down on shipping costs.

The one very big hit was our Super Blacks guitar picks. Nearly everyone who tried them loved them and we had people who had tried them from someone else, come down to our booth to get some for themselves. I am told to expect some reviews of them coming up. When it is confirmed, I will let you know where to find them. I honestly believe that these are the best picks I’ve ever played (which you would expect to hear from me wouldn’t you?) and we also had some pros stop by who said things similar. Very interesting business methinks…

The only negative was all of the salespeople (not actual exhibitors) roaming the hall who would come to the booth, feign interest in our stuff, engage me in conversation for 10 minutes only to reveal that they were there to sell to me! Web optimization, online advertizing, printing- you name it. Probably 3 percent of the visits to our booth were of this nature. It became tiring very quickly. But all in all, a terrific show. We should have a lot more good things to report in its aftermath. Stay tuned!

This entry was posted in Hell News, other bits. Bookmark the permalink.